The southern coast extends between latitude 4½º N to the west and 6½º N to the east. The country is bordered to the north by Burkina Faso, the east by Togo, the south by the Atlantic Ocean and the west by Côte d'Ivoire. 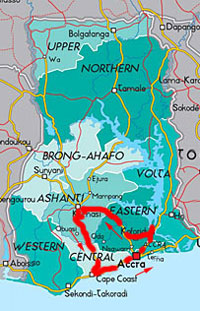 A narrow grassy plain stretches inland from the coast, widening in the east, while the south and west are covered by dense rainforest. To the north are forested hills, beyond which is dry savannah and open woodland. In the far north is a plateau averaging 500m (1600ft) in height. In the east the Akuapim Togo hills run inland from the coast along the Togo border. The Black and White Volta rivers enter Ghana from Burkina Faso, merging into the largest manmade lake in the world, Lake Volta. Ghana’s coastline is dotted with sandy palm-fringed beaches and lagoons.

Ghana has a tropical climate, hottest months March, April, 23-31ºC and the coldest month, August 22-27 ºC. There are relatively long dry season from mid October to March. Driest month January has a maximum rainfall of 15mm. There are two rainy seasons, from March to July and from September to October, wettest month, June has 178mm average rainfall.

Ghana 's vegetation can be classified into three zones (a) coastal savannah, tropical rain forest in the central part and the guinea savannah in the north.

The warm sun, the regular rains and the fertile soils join together to give exuberant vegetation. As a result, dense tropical rain forests have over the years being conserved and developed into game reserves and theme parks.

Ghana used to share a virgin forest of about 85,000km², which has reduced to about 40,000km² due economic and human developmental activities. It is only in the extreme southwest with its wet climate that is left intact. Our deciduous and semi deciduous forests offer both economic and medicinal uses.

The savannah, which is the main vegetation in the northern and certain parts of the south, is endowed with birds that are suitable for bird watching and other mammals.

The Ghanaian hospitality is legendary. In this peaceful and loving country, all visitors are received warmly and sincerely regardless of race, religion, nationality or sex.
Ghanaians are often referred to as ' Africa’s Friendliest People

19 million based on March 2000 population census, Ghana has an estimated population of about 22.5 million nowadays. It is made up of 75 ethnic groups who speak 46 languages and dialects. 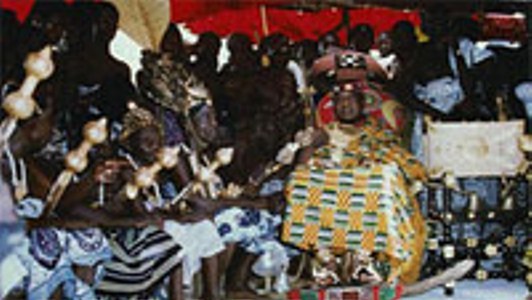